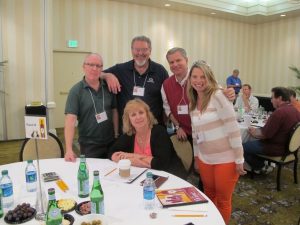 The Sheraton Fairplex hosted a group of Wine Scholars and Writers at the 74th annual Los Angeles International Wine Competition one fine Wednesday in May. As a member of the International Food, Wine and Travel Writers Association I was invited to attend this event which included a full day of judging with lunch and dinner. The winners of the competition will be served at the L.A. County fair this summer. The competition is also the foundation for an extensive wine education program available to the fairgoers.

75 talented judges congregated to blind taste approximately 100 wines each. The judges with an average of 25-30 years experience in their fields were called upon to test their vast knowledge of wine. The quickness with which they tasted, smelled, and scored the wines was mind boggling.

The blind-tasting method is used to judge these domestic and international vintages. Glasses are tagged with numbers in specific categories. No bottles were anywhere to be found, except behind the curtain where staff worked vigorously to prepare wine flights. The only things the judges know are what the varietal is and what the retail price point is. For example, some categories my panel tasted were: Merlot over $30.00 retail, Merlot under $29.99 retail, Cabernet/Merlot Blend (Australia), Ruby Cabernet, Marsala and Muscat . There were 3,000 wine entries for judging, ranging from innovative new wines to sweet dessert wines. Prizes were awarded Bronze, Silver, Gold and Best in Class.

I was fortunate to sit with 2 winery owners, a sommelier and a wine educator.  I’ve been seriously enjoying wine for about 25 years. I thought I knew a few things, but boy was I wrong. When I sat down with my panel to taste our way through 86 wines, I was immediately humbled. My scores didn’t count, I was observing the event. I found that sometimes I agreed with my compatriots and sometimes I didn’t. Never was I told I was wrong.  I asked the sommelier judge at my table for words of advice and he said, “Think long/think wrong. Go with your first impression.”

I quickly learned that my standard way of tasting wine wasn’t going to cut it. I swirled, sniffed and sipped. When I had just tasted about four wines, they were through the whole flight of around fourteen wines. These seasoned professionals sniffed all the wines and could pick up different nuances from their noses: too much tannin, not enough barrel aging, a hint of VA. (Yes, I had to look that up too- volatile acidity. This is where the acidity of the wine is deliberately elevated in order to enhance the fruitiness of wines that are meant to be consumed young.) The judges sniffed the entire flight, then swirled the wines in their mouths to get a sense of the flavors. After a few seconds they would spit it out and go on to the next wine.  I always look to see if the taste delivers on what the nose smells. I like to see how the finish is: does it leave a nice taste in my mouth or a tart one, a bitter one, a sweet one?

We also were served rare roast beef, grapes and cheese to help keep our palates fresh.Thank heavens for my new favorite olive, the Graber olive. These unique olives cleansed our palates and refreshed our taste buds to try another wine. 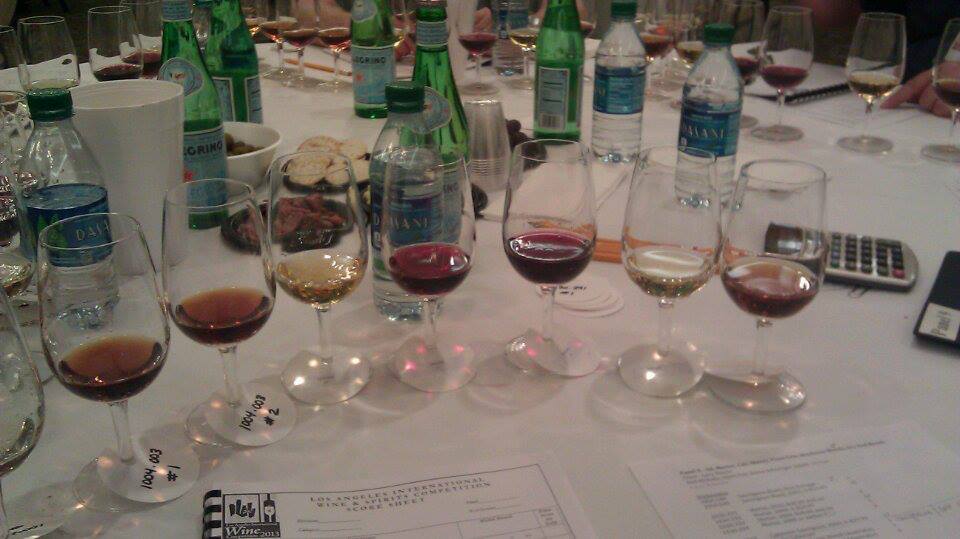 After about forty wines we broke for lunch which was hosted by the hotel and featured produce from their garden next door at the L.A. Fairgrounds. This garden, which we were able to visit for dinner that evening, produced enough vegetables for the hotel’s kitchen to prepare two fantastic meals for us and I’m sure for other guests too. The buffet was served outside in the garden and featured lamb, Atlantic Char, faro salad, baby greens salad and a cheese plate filled with unique flavors and colors. Dessert was chocolate cupcakes, made with bitter chocolate and sprinkled with powdered sugar.

We returned to our panels after lunch to taste dessert wines: Angelica, Marsala, Muscat, Vin Doux Naturel and Sweet Sherry. I can’t even pretend to know how to judge these wines, so I sat back and observed. My knowledgeable judges even knew what Angelica was (yes, I had to look it up too. A sweet fortified Californian wine made out of the Mission grapes which date back to the California Mission era and produced by Franciscan Missionaries.) and if it measured up.