I’ve flown thousands of miles to experience the Galapagos Islands in Ecuador. I’ve sailed around the islands viewing animals who have adapted to their unique and remote environments. Now it’s time to go closer to my front door and visit Anacapa Island, twelve miles from the mainland and a fun day excursion from Oxnard harbor. 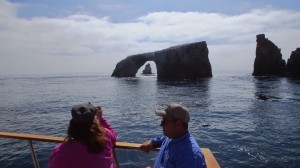 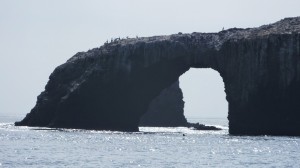 With evolution also comes extinction. Due to the isolation species are vulnerable and can’t always survive. The Santa Barbara Island Song Sparrow is no longer singing in this world. Plants are also lost. The Santa Cruz Island Monkey Flower, found only on the Channel Islands, is no longer growing within the park.

Island Packers departs from either Ventura harbor or Oxnard harbor every morning. The crossing is easy. You can do a day tour in about three hours. I was prepared with wrist bands to alleviate the seasickness and didn’t need them. Always a good thing.

The fun part about the crossing, (besides not being sick) was the dolphins. There were hundreds of them. They escorted us across the channel, jumping the wake and riding the waves, being very playful and showing us to stop and enjoy life. 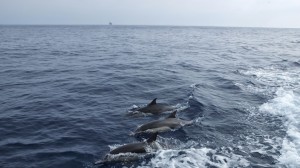 Dolphins escorted us across the channel 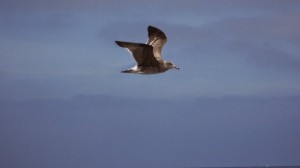 Pelicans flew with us also.

The crossing was quick and easy, taking around an hour. We passed by an oil rig which was very cool to see. I didn’t realize how huge those things are.

After another half hour or so the island came into view. The island is a five-mile long spine of rock emerging from the ocean floor. Waves have eroded the island, creating steep cliffs, sea caves (there are 50 on the island) and a natural arch rock that dots one end of the island. The natural beauty of this rock is magnetic! I took about 50 pictures from all angles. The lighthouse on the island stands as a tall beacon guiding ships through the channel. It’s unmanned and not open to tourists but is an icon of the island. 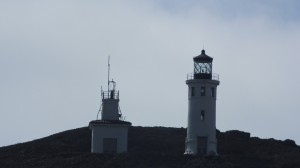 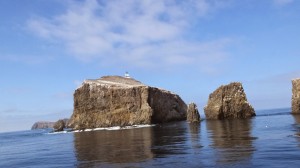 We dropped a group of people off at the “landing”- a steep, moderately perilous disembarkation platform from the boat. Many people disembarked for the day. They planned on camping, diving, snorkeling, kayaking and swimming along the coast and exploring caves. A group of volunteers also disembarked to work on island vegetation. Evidently they are trying to pull up plants that aren’t indigenous to the island.

I look forward to returning in the spring or summer and hiking the island. I have read that from February through April the vegetation is a vibrant rainbow of colors with native wildflowers. I also want to see the brown pelicans breeding colony. I’ve read that it’s the largest breeding colony in California. I’ve never seen a baby pelican before. 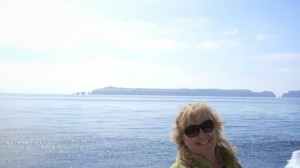 The author with Anacapa Island in the background.

For more information on the Channel Islands go to: http://www.nps.gov/chis/index.htm

For more information on Island Packers go to: http://islandpackers.com/