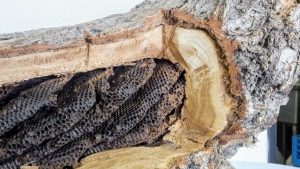 Beehive inside a tree trunk

Just like a beehive that looks small and compact from the outside, when opened up and dissected, it is large and complex. This is how the beekeeping and honey industry is in the USA. The inner workings of the beekeeping world are large and issue-filled. They are dealing with a plethora of issues from politics to the lifecycle and work of bees. From the production of honey to the pollination of almond trees and other crops. From viruses, mites and fungicides to lack of pasture for bees to work.  Scientists studying bees have their work cut out for them. Many universities have teams of scientists working on these issues. 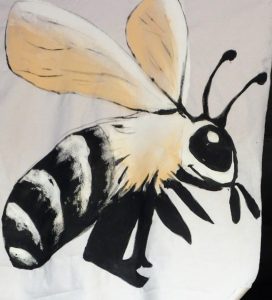 “The number one problem with honey production is the loss of pasture for bee hives,” says Jim Oakley, Oakley Honey Farms LLC, of San Diego, a member of SueBee ® Honey, the largest honey marketing cooperative in the world, and a past board member.  “Beekeepers are having difficulties with city, county and state governments not wanting hives on their property due to the liability. To put hives on land managed by the Bureau of Land Management and the Department of Forestry is nearly impossible due to the environmental studies and impact studies that they require. Some of my sites are 30-40 years old and are now unusable.”

The number two problem that Oakley is seeing is changing farming styles. “In the Midwest farmers are morphing to monocrops (huge fields of only one crop) and hybrids. Habitats are being destroyed by these monocrops. Where these farmers used to grow alfalfa and clover they are now growing mainly corn and soybeans. These crops either don’t have the same pollens or the same amounts of pollen and nectar. Bees have nothing to forage on,” Oakley explains.

A major challenge in the beekeeping industry is the issue of parasitic mites. “The mites lay their eggs in the cell where the bee is being developed. The mites feed off the pupa before it hatches. They hatch out unhealthy or dead,” explains Oakley.  “The mites go through their life cycle and get on the next brood and pretty soon you have a population explosion of mites. Colonies can’t handle it anymore.”

Then there is the huge issue of viruses. According to Oakley, there are approximately 10-12 that are passed around right now, mostly by these mites. “It’s like with humans, if you’re not healthy, things start going wrong. Viruses just need to run their course.”

“Because we’re dealing with a food product, and a mite is an insect, we have to use a miticide to kill it. Tolerance levels are very low and that’s crucial,” says Oakley.

“Pesticides are a bit different, they don’t wipe out the bee habitats, they intoxicate the bees. The bees neither want forage nor return home,” Oakley continues.

Additionally, illegal importation of honey into the USA from China, in what has been dubbed “Honeygate” alleges that Chinese honey, which can be laced with illegal and unsafe antibiotics, has created other problems for the industry. “This started a whole new set of problems,” Jim explains, “The honey was adulterated with antibiotics and other compounds such a sugars not approved by the FDA.”

The news is not entirely bad, however.  Enter the Almond Industry. “The almond industry is the most important industry to many beekeepers. If we commercial producers didn’t have the almond industry, we probably wouldn’t be in business. They are our major income source,” says Oakley.

Almond trees, in order to produce their fruit, need to be pollinated by bees in a short time period, usually from a few hours to a day. By some accounts, the industry needs a million and a half colonies of bees to pollinate every year.  The almond industry has been the major investor in research of mites, viruses, fungicides and pesticides. “They want good, healthy hives. Usually 2 – 2 ½ hives per acre of almonds,” says Oakley. 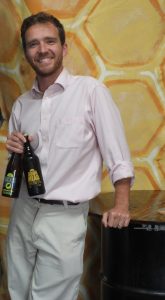 Another bit of good news is the resurgence of Mead. In the spirits world, Mead is one of the largest consumers of honey. Mead, a honey-based alcoholic beverage is made from fermenting honey with water and sometimes with various fruits and grains.

“Golden Coast Mead crafts authentic, modern meads that delight ecologically conscious and adventurous consumers. We endeavor to restore the health of the honeybee through the transformation of the honey market.”

Frank works closely with scientists at UC San Diego to understand and change the plight of the honey bee. The meadery even donates 1% of their profits to the causes that help bees thrive.

Frank would prefer to get all of his honey organic and local, but since demand outweighs supply, he gets all of his honey from the USA. “I would like to buy all local honey if possible. It’s hard to get since most local farmers are focusing on the almond industry.”

“There is no middle class of beekeepers. There are large operations with tens of thousands of hives and small ones with up to a hundred hives. The small ones do farmers markets and the large ones do pollination,” Golbeck laments. “I imagine a future where a thriving Mead Industry get hundreds of mid-size beekeepers with 500-1000 hives, selling their honey to high quality Mead makers for around $6.00 a pound. 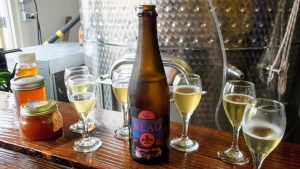 Variety of Meads at Golden Coast Meadery in Oceanside, CA.

Farmers are learning new practices to help save the honey bee. They are notifying beekeepers when they are going to spray their crops and they are changing their pesticides to be more bee-friendly.

Scientists are researching ways to breed in resistance of mites and viruses into bee larvae.

The Federal government is tightening its import laws so we don’t have another “Honeygate” (illegal dumping of honey in the USA by China) resulting in more viruses and mites.

“If this happens that means Mead makers and beekeepers are creating success, taking the essence of sunlight and millions of flowers and turning it into something delicious you can drink,” Frank Golbeck concludes.