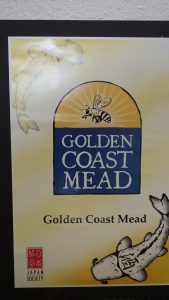 In the wine world when we use the term “terroir”, we refer to the taste of a grape from a certain region, vineyard or plot. We say that we can taste a San Diego Merlot or a Santa Rita Hills Pinot Noir and they’re different from a Santa Rosa Merlot or an Oregon Pinot Noir. In the mead world they use the word terroir to refer to different flowers that bees visit to collect their pollen and convert into honey. Frank Golbeck, then converts that honey into golden deliciousness in a glass. Mead.

Frank is a co-owner of Golden Coast Mead and he first tasted mead when he was in college. He was helping to clean out his grandfather’s attic and there was one bottle of mead amongst some apple cider. He took it back to his college dorm and shared it with his college friends. They loved it! So much so that they became business partners. And they are to this day. 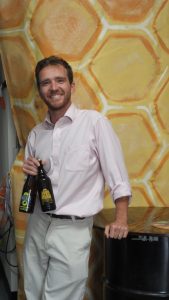 Frank is a font of knowledge on the history of mead. “It dates back 7,000 years. The Goddess Nankasi, goddess of brewing from Mesopotamia refers to mead,” he says. “Even the Bible refers to mead. It’s called Shakar in Hebrew. Proverbs 31:6 Give mead (strong drink) to him who is fading.” JR Tolkein in The Hobbit, refers to mead when the elves give mead to the Hobbits after they narrowly escape doom. “It’s called ‘manu’ in Sanskrit. That means ‘honey drink’. And who can forget the Vikings. They consumed mead.” 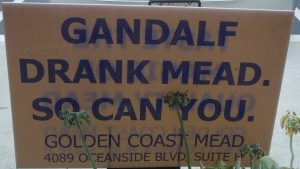 All meads have three things in common: water, honey and yeast. Frank uses distilled Palomar Mountain water, raw unfiltered Sue Bee Honey and a variety of beer yeasts. Mead can be brewed in a short amount of time. “It’s a four and a half week fermentation process,” Frank says. The carbonation is a natural part of the process.

Frank’s goal is to have three tiers of honey product. Currently he buys from Sue Bee in Central California. Next his intent is to buy from local beekeepers, and he ultimately hopes to own his own apiaries. “There is a need for more people to be beekeepers,” he says.

Colony Collapse Disorder has been a rampant problem this century resulting in a rapid loss of adult worker bees. According to Frank, some of the elements that cause the decline are: mites that carry viruses and fungi, pesticides that once ingested make bees not want to forage and forget where the hive is, getting lost, and ultimately not returning, and migratory bee keeping is too stressful on bees. 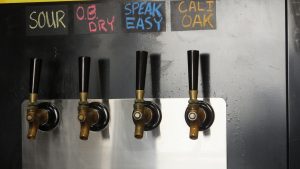 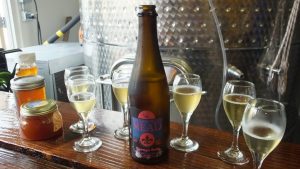 There are four primary tastes in mead: sweet, sour, salty and bitter. Golden Coast Mead currently makes a San Diego-style mead, which is light and refreshing, something that you want to drink in a warm climate. Their four meads on tap are: Sour, O.B. Dry, Speak Easy and California Oak. You’ll just have to try them to see the difference! 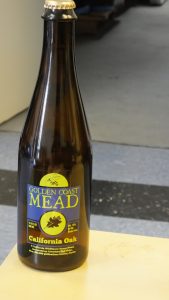 Frank is committed to sa ving the bees and making the best mead you’ve ever tasted. Their meadery and main tasting room is in Oceanside and they have a second tasting room in the Julian Station in Wynola. This fall when you head out to Julian for Apple Days and other fun events in San Diego’s back country, make Wynola and Golden Coast Mead a stop on your itinerary. You can check their hours of operation and what meads they’re currently serving on their website at: http://www.goldencoastmead.com