Old town Murrieta has a new restaurant. It’s a great alternative for those who think that they only restaurants in the area are in Old Town Temecula. It’s smaller and quieter and not full of shops and tourists. Best of all, it offers easy access from the freeway.

Extending their empire from their two Orange Coast Wineries in Orange County: Corona del Mar and Newport Beach, Doug and Debbie Weins along with their team of investors recently opened Le Grange Grill and Cellars, loosely translating to “the barn”. The red barn façade suggests that you’re in a farm town in the Midwest. However when you enter through the front double doors you are greeted with an inviting country chic interior. A large cement bar runs across the back wall. Here you can sit and enjoy a drink including a variety of beers. The main restaurant seating offers individual tables (made by Doug Weins, Mr. Jack-of-all-Trades). If you want to sit outside there is a gracious patio with misters to keep you cool. 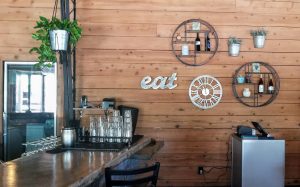 The interior of Le Grange Cellars 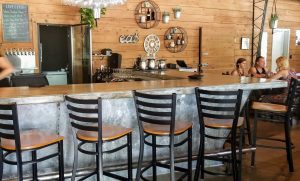 The winetasting area is behind a wall of wine bottles and separate from the restaurant. 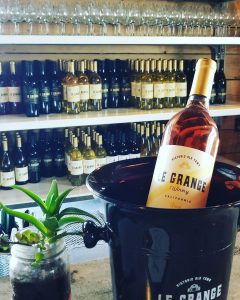 I was hosted for a media lunch one hot summer Saturday afternoon, with Debbie Weins, a gracious hostess and friend. 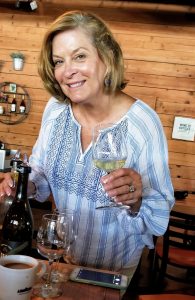 My top priority was to taste the Bierocks. Called Runzas in the Midwest, they are a yeast dough bread pocket stuffed with beef, either cabbage or sauerkraut, onions and seasonings and baked in a round bun, served with a beer mustard dipping sauce. Debbie said they are a staple in Nebraska. She got the recipe from the Methodists Women’s cookbook. 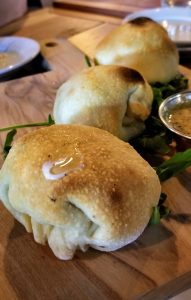 Debbie also insisted that we try a few orders of the bacon wrapped dates. Their unique twist is being stuffed with mascarpone cheese and pistachio wrapped in bacon and cooked until chewy.

I tried the burger which was excellent. I don’t usually eat burgers at restaurants because there are always such good options and a burger seems boring. But, rumor had it that the burger is awesome. And it was. I always get grief when I order a piece of meat medium well done, but didn’t here. For that I’m grateful. But I digress. The burger came with house made chips that were crisp and tasty. The burger was delicious. Really. I’m not sure how the chefs made it so well, but they did. I also wanted to try the pickle pot since my husband is on a pickling kick. A variety of picked vegetables came in a small mason jar. It was a great munch while we waited for our food. Probably not good to have while you’re tasting wine though! However- I forgot to take a picture. Perhaps it was due to the spectacular Albarino that I was tasting. Doug’s Double Gold winner from the Orange County Fair, a 2017 Albariño.

We also tried the Shrimp and Grits which were rich and gooey and downright tasty. 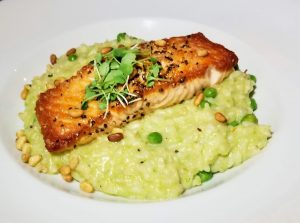 Salmon with Risotto and Pinons

My companion had the Salmon and Risotto to which there were many groans of enjoyment!

Dessert was also fun. I ordered the beignets, which actually came looking like French fries covered

in powder sugar and two pots of Raspberry Sauce and Chantilly crème for dipping. 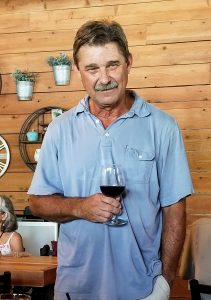 Doug Weins is a very prolific winemaker in both the family business, Weins Winery in Temecula Valley and he and his wife’s two Orange Coast Wineries.

While they’ve had the usual growing pains of opening a business in Southern California, the kinks are getting worked out daily. Training staff and finding the right staff are always the challenges in the beginning. I wish them the best and know that they will have a successful restaurant and winery.