Pruning Techniques and Tools: A Discussion 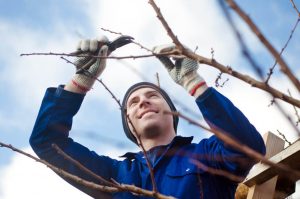 Pruning in the vineyard

Between last year’s harvest and the new growing season lies a gnarled mess of grape vines. The plants rested during the winter and are ready to begin their new growth cycle. First, however, the dormant plants will need pruning. For vines young and old, pruning is the key to managing canopy, fruit quality and growth.

“One of the most important vineyard practices a vineyard owner must accomplish every single year is dormant pruning. Pruning grapes aids in keeping the shape and architecture of the vine, sets the ultimate crop load for the season and encourages fruit formation for the following season,” said Michael Cook, Viticulture Program Specialist at North Texas A&M AgriLife Extension Service. Cook provides research-based knowledge to members of the Texas wine industry.

Pruning, Cook said, should be done every year. “Since clusters are exclusively borne on one-year-old wood (called canes when dormant) it is critical to prune your vine–whether you are a commercial grower or a backyard hobbyist–every single season. We often remove 80-90 percent of the wood that grew the previous year every time we prune,” he said.

Even if pruning is done each year, when done incorrectly it can adversely affect the health of the vines. Vineyard managers should ensure that they and their staff are taking the time to learn the correct way to prune their canopies.

“Improper pruning will always lead to a vine that is out of balance and more susceptible to environmental stressors and disease. Whether under- or over-cropped, the health of the vine itself and the crop for this season, as well as subsequent seasons, will be negatively affected. If this is not fixed and improper pruning occurs every season, the sustainability of the vineyard will be called into question rather quickly. Therefore it is paramount that anyone growing grapes take the time to learn and practice pruning with a mentor,” Cook said.

When to prune differs throughout wine regions; however, it is critical to do so at the appropriate time to avoid early bud break.

“In Texas, our greatest threat that limits when we can prune is spring frost. In other states, such as in the Central Valley of California, pruning can commence once the vines go dormant because in most areas frost is a rare occurrence. This is not the case for Texas. It is not uncommon in the High Plains, where 80 percent of our commercial wine grapes are grown (or in North Texas or the Hill Country) to see spring frosts occurring as late as Easter,” Cook said.

For growers in regions where frost is a concern, consider employing double pruning. In double pruning, vines are pruned twice during dormancy, once in late winter or early spring, and once before bud break, typically in March.

“With the first pass of rough pruning, the grower will cut each cane back to about 10 inches. This removes most of the tangled mess; and if the vine decides to break bud and there is a frost, only the top buds will be affected. These will be pruned off anyway during final pruning,” Cook said. “The second pass, or final pruning, occurs right before bud break. Here the grower will approach each spur position (the location where one-year-old wood is found) along the cordons and will remove all but one cane and prune the remaining cane down to one, two, or three buds. This type of final pruning is called spur pruning and is most common in Texas. While spur pruning is the most common technique, there are a few vineyards who cane prune certain varietals.”

While double pruning is a useful tool that can reduce the risk of frost damage, Cook told the Grapevine Magazine it does not guarantee protection from it.

One of the greatest fears of a new grower is pruning too severely or not enough. Often is it better to prune too much, since heavy pruning promotes good fruiting. However, Cook suggests balance and consistency to quell any worries.

“For each spur, the grower has to decide which cane he or she will keep and then prune down to one, two, or even three buds. For weak spur positions, only one bud will be retained for that season. A healthy cane, often around pencil size in diameter, can support two buds. Under vigorous conditions where a cane is larger than ‘Sharpie size,’ we will often leave three buds. It all boils down to balance. If done properly, the following season the new canes will be pruned to two buds,” Cook said.

For growers who aren’t sure what to do, or think they’ve made a mistake, reach out to a local extension office for guidance.

“One of the great things about cultivating grapes is that they are often very tough and resilient. If you make a mistake, it is important to correct that mistake as soon as possible. Fortunately, mistakes are usually easily corrected. If a mistake was made and the time to prune has passed, multiple canopy management practices can be conducted–such as shoot thinning and fruit thinning–which can be used to keep a vine in a healthy and sustainable balance,” said Cook. “The best way to know if you have made a mistake and how to correct it is to attend one of our hands-on workshops. Each of the four growing regions of Texas has an Extension Viticulture Program Specialist like me who can help you.”

To keep the vine healthy throughout the process, continual sanitation and use of fungicides will keep vines healthy.

“During the pruning process, it is advised to routinely sanitize pruning shears to help prevent the spread of disease, such as grapevine trunk disease. Additionally, once the vine has been pruned it is advised to spray specific fungicides within 24 hours to protect the recently made wounds on the vines,” said Cook.

Vine training takes approximately three to four years. In the first year of planting the focus is on creating a strong and straight trunk as well formation of roots. In the second and third year, the focus is on incremental cordon establishment; these cordons will bear the crop every year. It is strongly recommended to remove all fruit from the vines during trunk and cordon establishment since it will compete with root and shoot formation. A partial crop may be possible in the third year.

“Once the cordons have become fully established, the vineyard is considered mature, and that is when double pruning will be initiated. It is important to note that while the trunk is often considered a permanent structure, unless diseased or damaged, the cordons should be removed and retrained every 10-15 years to rejuvenate production,” Cook said.

Using quality tools saves both time and potential body overuse. FELCO has been manufacturing vineyard management tools for roughly 75 years. Their mission is to offer innovative and durable solutions to commercial pruning and cutting markets.

FELCO offers electronic pruners that have for years been quite popular in Europe, Australia, South Africa and even niche markets like South Korea. In recent years, faced with a growing labor shortage, these electronic pruners have become popular among U.S. vintners.

“The U.S. market so far has been blessed with very inexpensive farm labor when compared to a country like France, for example. More and more growers in the United States are seeing the solution to labor issues as well as being able to bring more women into the workforce with this product. It requires no effort to use and can dramatically improve efficiency and job quality,” said Ryan Amberg, Brand Manager of PYGAR, a subsidiary of FELCO.

The versatile FELCOtronic tool line can be adjusted depending on vine width and size. Workers can change the head opening by accessing the portable control box, allowing the sheers to cut vines up to two inches in diameter, making it, according to Amberg, an ideal tool for orchards as well.

FELCO offers a large variety of shears to fit different size hands and different dominant hands. “When doing fine pruning, you should always have the blade in the right position in comparison to the bud. If you are left-handed using a right-handed pruner, this can be difficult to achieve. With a left-handed pruner the ergonomics are proper for prolonged use,” Amberg said.

The blades of FELCO’s pruners are made from high quality proprietary high carbon steel. “We have a clear vision to be the premier product. To do this, it means we must cater to our customer and their needs and applications. Our blades are one of our key strengths along with our lifetime warranty on all forged aluminum parts. You can have a FELCO and keep it for multiple generations. They can rust, but will hold a much better edge than something in stainless steel which tends to wear much faster.”

FELCO tools are easy to maintain. All that is needed is light oil, hydrophobic grease and a sharpening stone. With these three items, you can keep a tool working like new for many seasons. Find FELCO products at nurseries, agriculture supply retailers and online at FELCO.com.

As with every growing season, pruning is just the beginning of an exciting new time. Bill Schweitzer of Paccielo Vineyards in Ramona, California certainly believes that, and hopes others remember as well. “Pruning is our chance each year to create great wine in the vineyard. If we watch what the plants do naturally, and guide them to do what we want, they will turn out great. Remember, the grape is a weedy vine; it has strong roots and the strength to grow to the top of the nearest tree. It is hard to make a mistake. The vine will grow around it.”