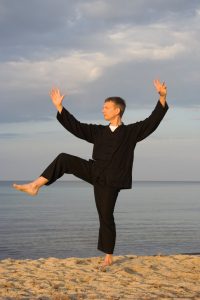 Tai Chi on the Beach is powerful

Perhaps you’ve seen groups of people in the park practicing slow circular movements in unison. It looks calm and peaceful. They have a serene countenance. You wonder what is that and how can you get it.

It is Qigong (pronounced Chee-gong) and/or Tai Chi (chee), which is the practice of harnessing and directing chi. Chi is energy. Life force. Chi flows through the meridians of the body, through vessels and arteries, the same channels that an acupuncturist taps into with her needles, or a masseuse uses to heal the body.

“I tell my students Tai Chi is ‘Serenity in the Midst of Activity’”, Tai Chi and Qigong teacher Susan Haymaker says. “It is the practice of being mindfully present while all kinds of commotion is going on around you.”

Tai Chi has been around, in many forms, for thousands of years. Originally developed in China around the 12th century A.D. it started as a martial art but over time people began to use it for health purposes as well.  These gentle exercises combine slow, deliberate movements that are repeated multiple times, stretching the body and moving inner energy. This moving meditation has both external and internal components.

“Tai chi practice refines our physical awareness in progressively subtle ways,” says Steve Ridley, Tai Chi and Qigong teacher. “Not only does our posture, balance and agility improve, but our capacity for sensitive perception throughout our entire physical system also increases. The beauty of this art is that it can never be fully perfected and that it fosters a process of continual growth.” 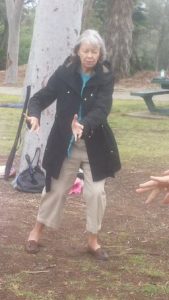 Practicing in the park

The effectiveness of Qigong is multi-dimensional. It is said that the mind moves the chi and the chi moves the body. Initially Qigong is about getting in touch with your body and clearing out blockages, this is accomplished through the nervous system. Chi flows along the nerves. As your chi gets stronger through continued practice, your nerves are strengthened and your body awareness is enhanced. 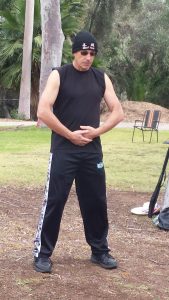 A published study in Science Daily reports that in a fifteen-week study, Tai Chi practitioners had an increase of nearly 50% in immune cells that help protect the body against the shingle virus.

Mindful eating is a direct result of a Qigong practice. “One thing I’ve found just from practicing is that my body is more sensitive to foods. Not in a negative way but I can feel when my body has had enough. Before I did Qigong, I would eat anything. Now, when I eat something that is inappropriate I am more in tune with my walk through life,” says Richard Nations, Acupuncturists at Nations Integrative Acupuncture in Mission Valley and Qigong teacher.

Richard has studied Chinese medicine and counsels that our bodies change as we age. “People over the age of 50 have a different metabolic ability and get cooler inside and should eat warmer foods. People under 50 can take in more calories and eat cooler foods. A younger body should sweat more than an older body.  As we age and sweat, we can easily become depleted. Our bodies don’t replenish to the degree a younger body can,” Richard says.

He continues, “Certain kinds of foods are hot (not heated) but in a cooler nature. Zucchini, for example, I will cook it with ginger, which is warmer, or garlic or black pepper. The cooking process gives it heat and the supplemental herbs help the warming process. I rarely eat something just as it is.”

Richard says he’s more in tune with his body now and feels that as a result of Tai Chi he has paid attention to eating properly. “Instead of saying I have a stomach ache, I’m going to take an antacid, I reflect on what’s happening. There’s a reason I don’t feel good. What is that reason? Oh, it’s because I just ate too much. Or ate at the wrong time. Or too much cold ice cream and gave me a headache.” 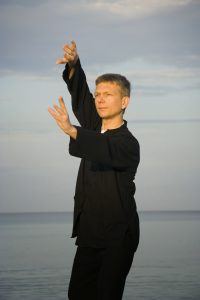 Balance, clarity of mind, posture, mindfulness- all results of Tai Chi and Qigong