Are you feeling stressed out? Do your daily demands reduce you to wet pasta by the end of the day? Do you not give yourself enough time to just “be”? If you answer yes to any or all of these questions, then it’s time to look into T’ai Chi Chih.

Perhaps you’ve seen people practicing this form of martial arts in the park or at the beach and wondered what it is and why are so many people doing it. Are they having fun? Well, they are having fun! 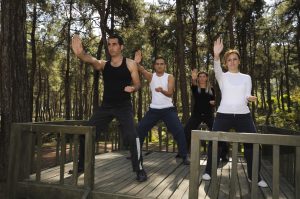 Enjoy the energy of a group in your Tai Chi or Qigong practice.

Tai Chi has been around, in many forms, for thousands of years. Originally developed in China around the 12th century A.D. it started as a martial art but over time people began to use it for health purposes as well. Along with the movements came a better quality of life, flexibility, strength, cardiovascular function, relief from pain, balance and suppleness to the body. 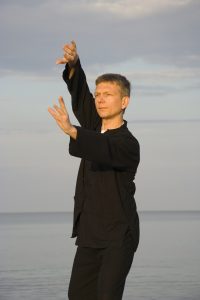 Your balance will increase after practicing Tai Chi or Qigong.

Susan Haymaker of El Cajon, California has been teaching T’ai Chi Chih for approximately 20 years.  “Tai chi revolves around ‘chi’,” She explains. “Chi is energy. Chi is life force.  Chi is unseen, but fully felt. It’s the same concept as electricity, when you flip on a light switch and the light bulb illuminates, it is energy that has flowed into the bulb and turned it on.”

Chi can’t be touched or felt, but when you move your body and there is heat, that is chi. Chi flows through the meridians of the body, through vessels and arteries. These are the same channels that an acupuncturist taps into with her needles, or a masseuse uses to heal the body. Relaxation is achieved through slow circular movements. The practice is ended with a standing pose, to allow the energy to be absorbed into the cells of your body. 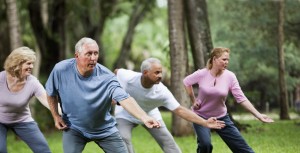 Tai Chi is also powerful out in nature.

The main components of the practice are slow rocking movements forwards and backwards of your feet while your arms move in harmony doing repetitive circular movements both sideways and up and down. To slow and calm your mind the focus is on the rhythm of the foot movement. Don’t forget strong breathing too. Breath is another strong life force.

“T’ai Chi Chih has many healing qualities,” Susan advises. “Besides increasing balance, a recent study was just published stating that Tai Chi led to a 50% improvement in the immune response to the shingles virus.”

Tai chi can also improve ones quality of life, ease chronic pain, reduce migraine headaches, increase balance and strengthen the body. “As people age they lose their sense of balance,” Susan says. “The movements, whether done sitting or standing, have profound results on balance.”

Studies have shown that those who practice the movements have less falls.   A recent study at Emory University in Atlanta found that men and women over the age of 70 who practiced Tai Chi reduced their risk of falling by 47% compared with a control group. Another study at the Johns Hopkins Medical Institution in Baltimore concluded that Tai Chi can reduce blood pressure in older adults slightly more than regular aerobic exercise. In 2007 the American Journal of Chinese Medicine completed a study that concluded that Tai Chi improves the antibody response to influenza vaccine in older adults.

Connie Daugherty, of Poway California, is a Tai Chi Chih student. She started learning the movements when she was healing from a shoulder injury. After her sessions were finished with her physical therapist, Connie was disappointed with both her continued pain and her lack of depth of movement of her arm. The therapist advised her that from then on she would have to do exercises on her own and that any gains to movement would be slow in coming. Disturbed by this proclamation, Daugherty sought out other options. She joined a T’ai Chi Chih class to see if she could heal herself and not suffer any more pain. What she found proved to be her healing grace. After a few classes and practicing for 20 minutes daily, she found that not only could she do the movements without any pain, but her injured arm was getting stronger and able to get full movement.

“I let my strong arm do the movements to the fullest extent and let the sore arm follow along,” Connie explained. “Eventually my sore arm wanted to do what my strong arm was doing. That is how I gained full movement of my arm. I can’t attribute it to anything else except the 20 minutes a day that I practice. In fact, not only am I pain free, but my balance is better and I don’t have the difficulty in going up and down stairs that I was having before Tai Chi Chih.”

Tai Chi Chih is currently offered in a nine week class through Poway Adult School. Go to their website at www.powayadultschool.com for class information. To search for a teacher near you go to www.taichichih.org.

Daily practice promotes inner peace and contentment, among other things. Every day is a new day and a new practice.